Building a Business on a Healthy Diet

Building a Business on a Healthy Diet 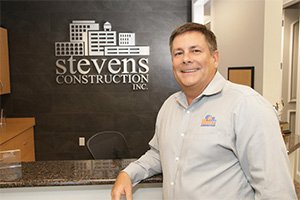 Stevens Construction has succeeded by not ‘overeating,’ says president Mark Stevens. The company is not about to start gorging — even during buffet days.

Mark Stevens has some advice for private small- or medium-size businesses that market conditions will inevitably force into going on a diet: when the economic bounty is plentiful, don’t overeat.

Stevens, founder and president of Fort Myers-based Stevens Construction Inc., has seen other companies in his industry fail because of gluttony. That’s why he built his business by carefully selecting from the buffet of available projects — while others took too much.

Meanwhile, he fed his business a steady, simple diet of only a few ingredients: institutional health care, neighborhood and resort amenities and smaller speciality commercial projects.

“In this current market I think we will see more contractors die of overeating than we saw starve during the recession,” says Stevens, who founded Stevens Construction in 2003. “There is such a small pool of talented people who can actually build the buildings. One of our greatest struggles now is trying not to overeat.”

Stevens left another general contractor to start his own company, admitting his timing was more luck than skill. He spent those first five years before the recession deepening relationships established at his prior firm, where he specialized in health care construction. “If I had started the company five years later, I think the outcome could have been substantially different,” he says.

That time spent building relationships has keyed the current firm’s success. When the economy began to fail in 2008, Stevens turned to those relationships, partnering with a longtime client to build an acute care facility in Orlando, where Stevens opened an office.

“Knowing my business was going to dry up here,” Stevens says, “we were presented with a couple of decisions: Do we downsize along with the recession, or do we look at other geographic areas and try to maintain the key staff we had?”

The company landed more health care projects in Orlando along with a large amenity project for Lennar Homes, leading to resort amenity work for Hilton Hotels. In 2013, Stevens parlayed a relationship with Florida Hospital into the Tampa market, where the company specializes in building, rehabbing and maintaining acute care facilities.

“We literally could have doubled every year, but we’ve controlled that growth to what we think is sustainable for our company,” Stevens says. “We have a bunch of really top-notch management folks, and we’ve all collectively made that decision to take what we can do and stick with the core values.”

Stevens did not have to cut his staff during the recession, and currently employs 47. Although only 51 years old, he has implemented a succession plan that also allows for incremental growth. “About seven years ago,” says Stevens, “I realized the company was quickly outgrowing my and the upper management’s ability to run things,”

Chief among those philosophies is building partnership-type relationships with clients even before land is acquired. This allows Stevens to help clients understand set expectations.

“Before I started the company, so many clients would come to us with a project that’s already designed as a $3 million project, and the lowest bids would come in at $4 million,” says Stevens. “They’ve been sold that dream, they’ve sold that dream to their staff and their partners, and now they’re moving backward. Working from the beginning with our clients, we have the opportunity to set realistic expectations so the outcome is so much better than the typical project.”