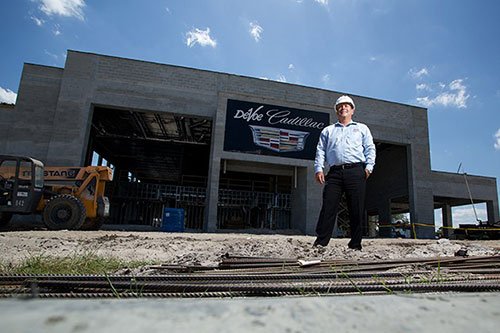 Mark Stevens stands in front of the DeVoe Cadillac dealership in Naples that his firm, Stevens Construction, is building on U.S. 41. The construction company survived on health care projects during the downturn, but Stevens sees more diverse commercial building opportunities like this one today. Photo by Brian Tietz

Fresh out of the University of Florida with a degree in construction, Mark Stevens turned down what seemed like a graduate’s dream job.

“I almost took a job with Disney World,” says Stevens. It was 1990 and the company was going to send Stevens to California and Europe to work on designs for its theme parks. “It sounds sexy, and the pay was awesome,” he recalls.

Instead, Stevens came home to Cape Coral and went to work for Compass Construction, which had just five employees at the time. “I was never one for big bureaucracies,” he explains. “At Compass I had the opportunity to do everything.”

But even as a young graduate, Stevens had his eye on a prize that Disney’s magic could never produce: “I knew I wanted to create my own business,” he says.

Stevens helped build Compass to a $30 million company by the time he left in 2004. “I always wanted to own Compass Construction,” he says. But the owners weren’t ready to sell, so Stevens started his own company, Stevens Construction, in Fort Myers in 2004.

At the time he started his own firm, Stevens was 36 years old and had three children, ages 5, 3 and 2. He took out a home equity loan for $400,000 from Bank of America. “I liquidated everything I had,” he says. Because he had signed a non-compete agreement with the owners of Compass, Stevens launched his company with zero clients.

But Stevens had developed a good reputation at Compass, particularly in the heavily regulated area of health care. So when he launched his business, he built a stunning modern building for eye specialist Alexander Eaton’s Retina Health Center in Fort Myers. “That was the first building,” Stevens says, earning him a reputation among physicians who regard Eaton as a savvy entrepreneur. “That single job exploded my health care practice.”

Retired banker William Valenti recalls being the only one to lend to Stevens when he first started out. “I remember when Mark came in the bank,” says Valenti, who was then CEO of Florida Gulf Bank. “He was very determined; he knew where he was going.”

The biggest risk to lending to construction firms is that they won’t get paid when they complete the job. But Valenti knew of Stevens’ work with Compass. “Was it a little bit of a risk? Yes it was,” Valenti says. “But he’d had a lot of experience in the area supervising many kinds of projects.”

Mother Nature helped, too. After Hurricane Charley blew through Southwest Florida, Stevens landed a plum job rebuilding South Seas Resort’s pool complex. “That gave me a leg up on commercial,” he says.

But helping doctors plan for expansion became Stevens’ trademark. He designed buildings so that patients could flow more easily through the practice, allowing doctors to see as many as 30% more patients because of the way their space was designed and built. “You learn from every one of those,” says Stevens, 47, who keeps tabs on how the buildings have performed over time.

“Mark is a sponge,” says Jack Neu, managing partner with Nielson Wojtowicz Neu & Associates in St. Petersburg. Neu met Stevens four months after he started his construction firm and has provided him surety bonding. “When there’s somebody around with an opinion of value, he listens.”

Neu says Stevens’ skill is hiring the right people and not micromanaging. “Mark has the ability to select good people and train them in the way he believes,” Neu says. “But he accepts opinion. He lets them do their work. He can’t do everything himself.”

That was critical during the downturn, when Stevens pared down his firm to just a dozen key employees, down from 40 during the boom, and asked them to do more with fewer resources. By then, most of his business except health care had faded. “Health care construction was the only thing that had a pulse,” Stevens says.

In part as a reward for sticking out the tough times, Stevens added two longtime employees as partners in the business, allowing them to purchase shares in Stevens Construction at book value. A third partner will join them soon. “They stuck with me through the low point,” Stevens says.

But Stevens was determined not to let the recession take him down like so many others, and he took a gamble by expanding to Orlando in late 2008. Friends and associates told him it was too risky to hire people and open an office in Orlando during the recession. “I was in a Vistage group at the time and they told me I was crazy, too,” says Stevens. Vistage is a peer group of CEOs in unrelated industries who counsel each other confidentially.

After Orlando proved to be a success, Stevens Construction subsequently expanded to Tampa. Those expansions during the downturn have helped boost the company’s revenues by double-digit percentages in the last few years. “Tampa carried us last year,” says Stevens.

But construction has rebounded in the Fort Myers and Naples areas, too. Last year, Landmark Hospital of Southwest Florida selected Stevens to build a new 50-bed acute-care hospital in Naples.

Stevens says building a hospital from scratch has always been on his bucket list of projects. That’s an opportunity even Disney couldn’t have given him.