As a boy growing up in Cape Coral, Mark Stevens loved to take things apart to learn how they worked.

“A lot of times I took things apart – like my dad’s lawn mower – and I wasn’t able to put them back together,” he said. “He was a little unhappy when he got back home.”

From that experience, he learned the real challenge is in putting things together. 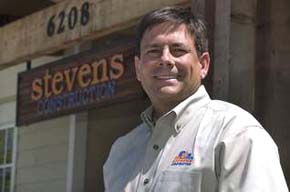 As president of Fort Myers-based Stevens Construction, Stevens has found a niche building complex medical facilities and intricate commercial projects where the margin of error is more narrow than a 10-year-old armed with a screwdriver can likely imagine.

“No project is ever the same and they are very technically difficult, so they are always challenging,” said Stevens, 41. “The time frames are very, very difficult and budget is, of course, always a concern. Those are the projects I like the best.”

Stevens launched his company in 2004 after 14 years with Compass Construction. He started alone, but the company now employs 19 and had revenues of about $18 million in 2007. The company was named 2007 Contractor of the Year by the Lee Building Industry Association.

Projects have included a pool and restaurant complex at South Seas Island Resort, the Azul Cosmetic Surgery and Medical Spa in Bonita Springs and the Pediatric Orthopedic Center located at HealthPark in south Fort Myers.

The economic slowdown has stalled many commercial projects, but Stevens said the demand for specialized health care construction remains strong.

The company will start construction on a surgery center north of Mount Dora, near Orlando, the company’s northernmost project so far. Stevens hopes to eventually expand into Georgia.

“I don’t want to become a value driven company, but I want to continue to grow to continue to offer challenges to our staff and let them grow with the company,” he said.

Stevens sat down this week to talk about growing his company, economic challenges, getting into the outdoors and even the company’s distinctive orange and blue logo.

“My dad was a part-time farmer and owned a gas station (in Connersville, Ind.). He sold everything and moved the whole family to Cape Coral.

Our house was by the police station there off of Santa Barbara and I think you could see five houses from our house. Daniels was a dirt road and Big John’s was the only grocery story in Cape Coral. It was a great place to grow up. It was a nice, quiet community. Obviously, there were a lot more retirees at the time.

It was interesting with the diverse backgrounds of all of the different kids I went to school with. Everybody was from somewhere else. If you take a poll now you would find a lot of people who were from Florida, but back then we were scattered from everywhere.”

“In school, I got interested in architecture and took some drafting courses. I wasn’t sure if I wanted to be a builder or an architect. I took some architecture classes in college and enjoyed them, but I realized it took me four times as long to produce the same end product as the real architects.

I realized there is a lot of artistry that goes along with it and I respect those guys a lot.

Even when I was taking my associate’s degree stuff here (at Edison), I was working for different construction companies. I worked for Dean Steel Buildings. I worked for an air-conditioning company. I worked for a frame carpenter. I was just kind of getting a feel for the industry and I enjoyed putting buildings together and standing back and looking at the end product, even if it was just a small component, like the carpentry.

When I first started that (construction) program (at the University of Florida), there was no question in my mind that is what I wanted to be doing and I enjoy it now just as much as I did then.”

“One of the most gratifying buildings is the first building after I left Compass.

A week after I left, I got a call from a CPA who I know very well and she said, ‘I heard you are out on your own. Are you interested in talking to this doctor about maybe doing some consulting for him?’ I said, ‘OK, sure. I’ll do anything. I’ll wash his windows.’

I went and met with him and he gave me the option to do the pre-construction services, which is the budgeting and that kind of stuff. I went on to build the building, which is the Retina Health Center right on Summerlin. I pass it every day and every day when I pass it, I am proud to have been a part of it.

It was the first building and it helped propel me into what we have been able to accomplish to date. It’s nice to have a touchstone like that and it is nice for Dr. (Alexander) Eaton to give somebody the opportunity like that.”

“We’ve built some pretty unique buildings. We don’t do any residential or multi-family, so about 50 percent of what we do is healthcare and 50 percent is other commercial projects.

One of the neatest projects we have done is a new restaurant, bar and pool complex for South Seas (Island Resort).

That was pretty neat. When you travel or go on vacation, you are always fascinated with wherever you are at. There are so many people from all over the world who come out to South Seas and when you stand up on the second floor of that balcony and overlook the pass and pool, it is absolutely fabulous. To be a part of that is really, really neat.”

“We are still underdeveloped in many parts of Southwest Florida and the state in health care, from assisted living facilities to nursing homes to medical offices and hospitals.

It’s going to continue to grow. It’s such a unique type of construction that there are not a lot of folks out there who can do that type of work.

It has its own set of codes and the quality expectations are much, much higher and the work is much more intricate. You are dealing with very high-tech equipment like radiology equipment or medical gas systems and emergency generators and high-efficiency air conditioner systems. The tolerances are very minimal.”

Then put those folks on the right seat on the bus and let them know the direction of the company and my expectations and then let them run with it.

I’m not a micromanager. We are here to train and assist, but everyone here works in different ways and accomplishes things differently, so I always try to keep an open mind to better ways to accomplish the goal.

When we look at a resume or interview a candidate, obviously they need a great deal of experience to enter the specialized type of construction that we are in. But, we also take into consideration the attitude of the folks. I would rather take in someone who is trainable with the right attitude than people with all of the experience.”

“When I sit down with an owner, there are a lot things they need to consider before they go off and start to build a building.

I like to get involved to make sure we aren’t just building a building for an owner. We are satisfying what their needs are now and what their anticipated needs are. For about 90 percent of our projects, we get involved at the same time as the architect.

We play a very different, but significant, role in the design of the project for the owner, both from a cost perspective and buildability. We deal with this stuff every day, so the traditional method of hiring an architect and then going to ask the contractor for an opinion is old-fashioned thinking.”

“My forecast is that we are going to continue to slow down through ’09 and into 2010.

We are certainly going to feel it, which ultimately, I think is good. There certainly needed to be a correction in the marketplace and we are now seeing that. There are a lot people who are suffering from that and moving on, but that is going to make those of us who are established and who have built good companies even stronger companies…

We have a lot of things going for us. I think we forget through everything we read and everything we hear – a lot of folks are down in the dumps about our current economic situation – but sometimes we have to take a deep breath and look around. There are a lot of people in worse shape in an area that is not nearly as beautiful and doesn’t have the things to offer that we do.”

“My pastime is anything outdoors, so I do a lot of hunting and fishing.

I always say golf is for those who can’t find another way to enjoy the outdoors.

I do backwater fishing, snook, redfish and trout, but that is my secondary passion.

My first passion is to be out in the woods. In fact, I am going to Alaska in about three weeks. I’m going on a brown bear hunt.

I usually take one or two big trips a year. In October, I went on an all-horseback hunt in Colorado for elk for seven days. When I got out of the woods I said I was never going to do this cold-weather stuff again, but I went for a little colder this time.”

But you certainly don’t see any garnet and gold in my office.”