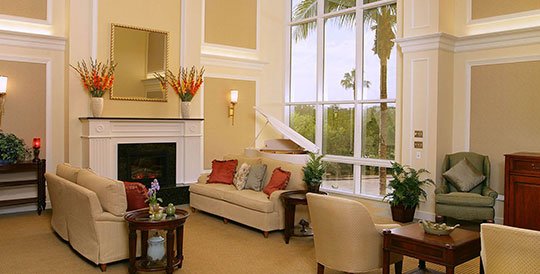 Stevens Construction remodeled King’s Crown’s existing recreation and common areas and expanded the ground floor to include additional recreational space and administrative offices. Construction of the 24,000-square-foot project was completed in multiple phases to allow the facility to remain operational during construction.

Numerous enhancements and innovative touches were added throughout this renovation that would provide residents a more modern and convenient living environment. For example, within the mailroom at the lobby, residents were now able to open their mailboxes with their apartment keys versus having to use a separate key. Pool tables, coffee bars and flat-screened televisions are now featured in the updated parlors.   The Grand Salon had been enhanced with a mantel and fireplace, which complemented the natural lighting from the expansive windows, providing a welcoming gathering spot for residents. During the construction of the Grand Salon and its balconies, a window was incorporated so residents could watch the project’s progression.

The addition of the project scope required an adjustment in the schedule, however even with the adjustments; the project was completed within the agreed upon schedule.

“Stevens Construction has consistently demonstrated their unique ability to work in and around our occupied facility without sacrificing quality and most importantly resident safety.”