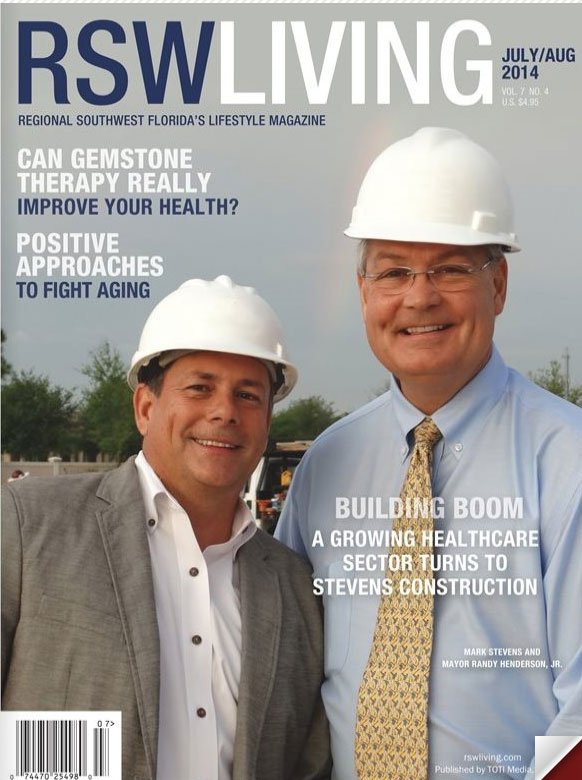 Some people would let obstacles stop them dead in their tracks, but Mark Stevens is more of a bring it on type of guy.

The projects I love the most are the ones that come with the most challenges,” he explains.

It’s a good thing Stevens enjoys a good challenge. As founder of Stevens Construction, he’s definitely encountered his fair share since he created the company in 2003.

“Almost every project comes with a challenge or multiple challenges,” Stevens says. “It could be time restraints the owner is under, budget constraints or many times owners come to us with a need, but they don’t even know where to start. To walk those owners through the development process from purchasing a piece of land or existing building to remodel and seeing the final completion is what excites me.”

Stevens has more reason to be excited. In just his first three years, he was able to grow his company’s gross revenue to $30 million. Inquiring minds are dying to know what his recipe for success is, but Stevens insists it’s a simple one.

The growth has been fueled by its (the company’s) reputation of ethical business practices, superior management and proven track record of constantly delivering projects on budget, on schedule and with unsurpassed quality.

Speaking of projects, Stevens and his company are behind the construction and renovation of dozens of healthcare buildings across Southwest Florida and the rest of the state. You’ve probably passed many of his buildings, but didn’t know he was the man behind them. As a matter of fact, Stevens Construction is responsible for more than $100 million in healthcare construction across Florida.

Stevens can add construction manager credits to his resume for a number of local projects, including the Center for Specialized Surgery, which is the operating facility for Orthopedic Specialists of Southwest Florida. It’s located off Cleveland Avenue in Fort Myers, just north of Lee Memorial.

Recently, Stevens and his company finished a new office for Pediatric Dentistry of Fort Myers. Stevens, along with architect Ramon Acevedo of GMA Architects and Designs from Imagination Dental Solutions, was able to create a truly one-of-a-kind design and set-up that brings underwater adventures to dry land. The nearly 8,000 square foot office includes a giant whale riding a jeep and an entire underwater scene in the dental bay.

But Stevens Construction isn’t stopping there. The company is also gearing up for its Landmark Hospital project in Naples. When finished, the hospital will have 87,000 square feet of space, 50 beds and will serve as a long-term acute care center.

Stevens Construction also has satellite offices in Tampa and Orlando, which manage to stay just as busy as the Southwest Florida headquarters.

But for Stevens, building a strong community goes way beyond concrete slabs and two-by-fours. “Stevens Construction believes in enhancing the community they build. As such, we support many local charities,” Stevens explains.

Some of Stevens philantropic endeavors include being he corporate chair for the JDRF Walk to Cure Diabetes. In 2012 and 2013, his firm was the number one corporate team in Lee County, raising more than $12,000.

Stevens also likes to lend his expertise to people in need. He helped finish one of the largest home makeover projects ever with Builders Care. Stevens donated labor and other services to fix up the home of an 87-year-old Lee County resident. An electrical fire ruined much of the existing structure, which also needed to be handicap accessible.

“Mark is the kind of person that when he commits to something, you can consider it done,” says Heidi Taulman, executive director of the Lee Building Industry Association Chapter of Builders Care. “We are so very thankful for him and his support.”