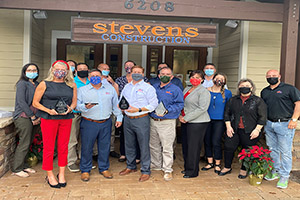 A panel of nationwide judges named Stevens Construction Contractor of the Year based on criteria such as the company’s achievement of goals, client relations, professional certifications and community responsibilities. This is the ninth year Stevens Construction has received this honor, the Company won in 2018, 2017, 2016, 2015, 2014, 2012, 2011 and 2007.

Stevens Construction won a Summit Award for the best healthcare project for Frantz EyeCare. To accommodate their growing Naples clientele, Frantz EyeCare, the design team and Stevens Construction thoughtfully collaborated on a design that aligned with their budget and schedule, provided the aesthetic appeal to the Naples community and promotes staff efficiency, data collection and a unique and comfortable patient flow experience. Frantz Eyecare houses a 9,280-square-foot medical office on the first floor with an optical boutique, 21 exam rooms, patient lounge and procedure room. Situated in the center of the medical office is the cornerstone of the design, a state-of-the-art diagnostic testing room, which evaluates eye conditions and vision capabilities.

Stevens Construction has earned 58 Summit Awards since the program began in 2006.

The Summit Awards program recognizes BIA members who have obtained an outstanding level of success and demonstrated superior professionalism in the commercial construction industry throughout the year. The projects were judged for quality of construction, challenges, timeliness of completion, client satisfaction and safety.