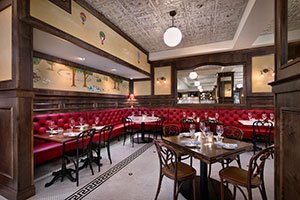 FORT MYERS, Fla. (July 31, 2017) – For the tenth year, Stevens Construction has won an Aurora Award at the Southeast Builder’s Conference. The Aurora Awards honor the best in construction in a 12-state region.

With seating for 240, The French features an indoor/outdoor bar and dining courtyard with a mature, 35-foot lighted live oak-tree which was installed by Stevens Construction.

Offering rustic country and coastal French dishes, The French is the vision and creation of award-winning Chef/Partner, and leader in the Southwest Florida culinary scene, Vincenzo Betulia.

Stevens Construction has earned 19 Aurora Awards since 2007, five within the Healthcare division, three within Commercial, one within Public Works, two in the Hospitality category and one Renovation award. In addition, Stevens Construction has earned the highest distinction, having been recognized with seven Grand Auroras, which honor the best project within an entire category.