Stevens Construction Wins Best in 12 States at the Aurora Awards

Stevens Construction Wins Best in 12 States at the Aurora Awards 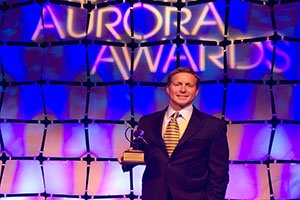 YERS, Fla. (Aug. 1, 2016) – For the ninth year, Stevens Construction has won an Aurora Award at the Southeast Builder’s Conference. The Aurora Awards honor the best in construction in a 12-state region. The company was also presented with a Grand Aurora Award, which recognizes the best project within an entire category.

In a ceremony held on July 29th in Orlando, Stevens Construction earned an Aurora Award in the commercial category, 20,000-square-feet and over for Landmark Hospital of Southwest Florida. The 86,676-square-foot long-term care hospital was designed and constructed to efficiently care for patients who have been dismissed from general hospital yet are too sick for skilled nursing care.  Built for convenience, patients can receive surgery or X-ray onsite instead of traveling offsite for these services.  Designed with a unique crescent shape, the hospital is situated on the second and third floors, Landmark features operating rooms, conference rooms, X-ray, CT Scan and 50 patient rooms.  The first floor is being leased.

Designed by HuntonBrady Architects, the Landmark Hospital is licensed and inspected by the Agency for Healthcare Administration, which ensures regulatory compliance for healthcare facilities throughout Florida.

Stevens Construction has earned eighteen Aurora Awards since 2007, five within the Healthcare division, two within Commercial, one within Public Works, two in the Hospitality category and one Renovation award. In addition, Stevens Construction has earned the highest distinction, having been recognized with seven Grand Auroras, which honor the best project within an entire category.